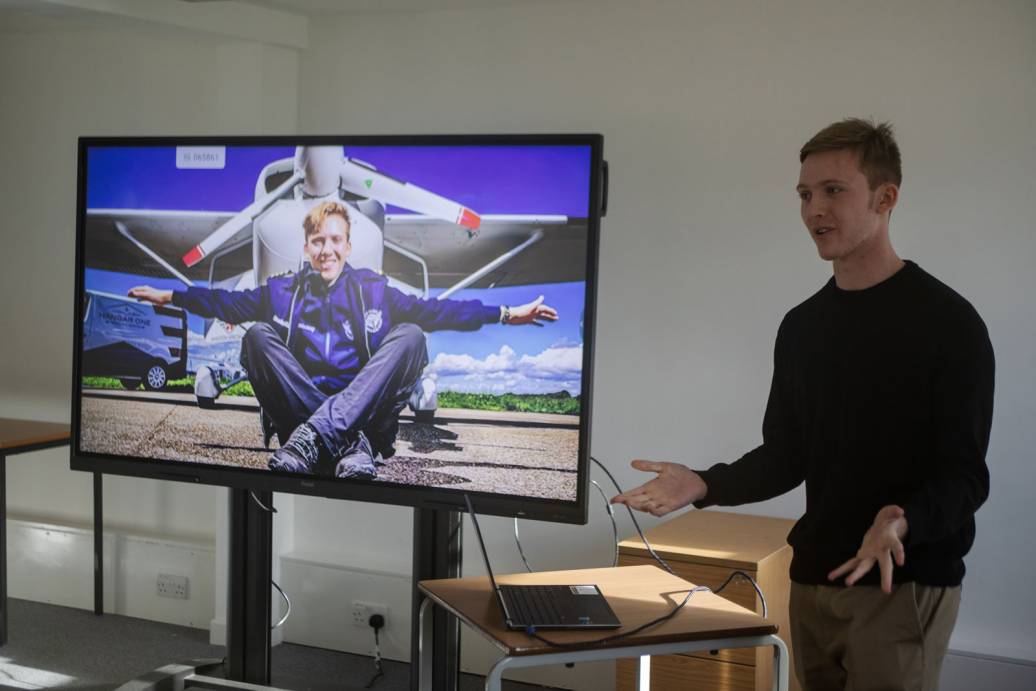 It was a privilege to welcome Travis Ludlow to Marshall in Cambridge to visit our hangars and talk to our apprentices about his experience of becoming, at the age of 18, the youngest person to fly solo around the world.

Travis developed a deep love for aviation when he was just four years old, never going to sleep without reading something from his collection of aviation magazines and books.

A family member bought him a gliding lesson for his 12th birthday and Travis was hooked. He went on to become the UK’s youngest gliding pilot, aged 14. This led him to pursue his pilot’s licence in light aircraft at 15, and once again Travis achieved another record when he became the youngest person in Britain to hold a certified private pilot licence (PPL), passing all the requirements when he was 16 years old – six months before the minimum age of 17 required to legally hold a PPL.

His dream of becoming the youngest person to fly solo around the world started while Travis was still at school, before he had his pilot’s licence or an aircraft. Knowing that it would be a costly undertaking, Travis spent his days after school contacting organisations to raise funds. Through sheer determination and persistence, Travis raised half a million dollars (£411,000) in corporate sponsorship to make the record attempt possible.

Raising money wasn’t the only challenge Travis had to overcome. Originally, he planned to take off in June 2020, but the global pandemic delayed the start of his journey by a full year. He eventually took off from his starting point in the Netherlands in June 2021. His solo trip around the world was also fraught with obstacles, misadventures and one very dangerous situation that nearly put a permanent end to his dream. Travis experienced a low fuel warning while flying over mountains in the middle of the night with three hours left to his destination. He had passed the point of no return and had no option to divert to another airfield. Some how Travis stayed calm in the face of danger and managed to land safely without declaring an emergency. Needless to say, he did not tell his parents about this incident until he was home safely.

This extraordinary around the world flight took three years of planning but only 43 days to complete, making his circumnavigation the fastest of all the young solo pilots who had successfully made the journey, while flying the slowest aircraft.

In 2022, Travis was awarded the Marshall of Cambridge Medal by the Air League at their annual awards in recognition of his achievement as the youngest pilot to fly solo around the world. We were grateful that Travis found time to visit us before heading back to the University in Florida to talk to Marshall and Bombardier apprentices about his extraordinary achievements. The apprentices were inspired by Travis’ determination, passion, and commitment to developing sustainable aviation technologies.

Bombardier apprentice Saffah Bashir said: “When I see what young individuals have accomplished it truly is inspiring, so to meet someone my own age achieving greatness motivated me immensely. Travis shared an analogy about a cookie cutter: when we use a cookie cutter it cuts the same shape repetitively. Essentially, we are all cut the same, limiting ourselves by not stepping out of our comfort zone. Ultimately, you should try not to have a cookie-cutter lifestyle, but instead, be bold and be different. Stand out. After personally speaking with Travis about his tremendous perseverance and patience, the biggest takeaways were to never give up on your dreams, stay disciplined and focused on your goal, and always seek out opportunities to stand out; if they aren’t there, create them!”

Travis is now studying electrical engineering and continuing his flying at Embry-Riddle Aeronautical University in Daytona Beach, Florida. He also introduced us to his new venture Project eFlight, which is dedicated to sustainable aviation and battery-powered flight. Travis’ next goal is to compete in the first Pulitzer Electric Aircraft Race later this year with an aircraft that he is adapting.

We will continue to follow his progress and we are excited to see what Travis achieves next.