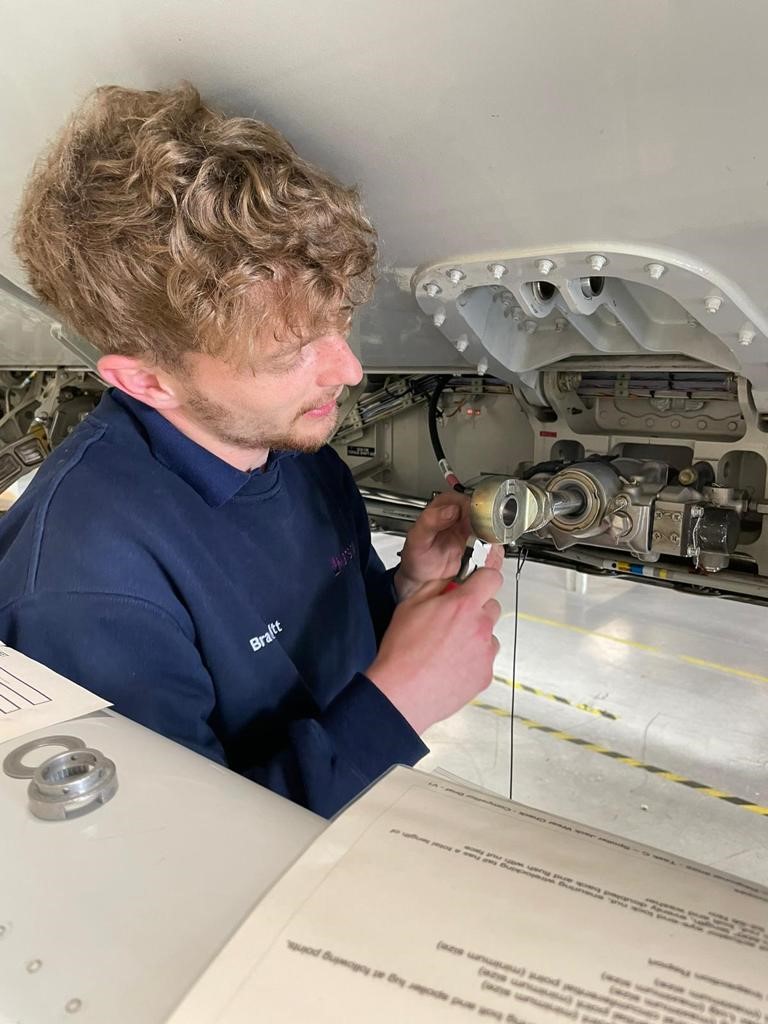 The WorldSkills Championships is an independent charity operating in 80 counties working with governments, employers and education to support young people across the globe through competition-based training, benchmarking and assessment.

National teams are ultimately invited to put their skills to the test in the biannual international finals, which are often referred to as the ‘Skills Olympics’.

Apprenticeship Coordinator and former Marshall apprentice, Georgie Scott-Wilds, supported the candidates who put themselves forward to compete in the competition. “Several apprentices were nominated by me, and members of the Marshall Skills Academy team based on their current knowledge, skills and behaviours,” she said.

“Those that wished to proceed had to complete the ‘Passive Stage’, which consisted of approximately 70 multiple-choice questions. Four apprentices put themselves forward and we were delighted that all four passed and were invited to the nationals in Coleg Cambria, Wales.” 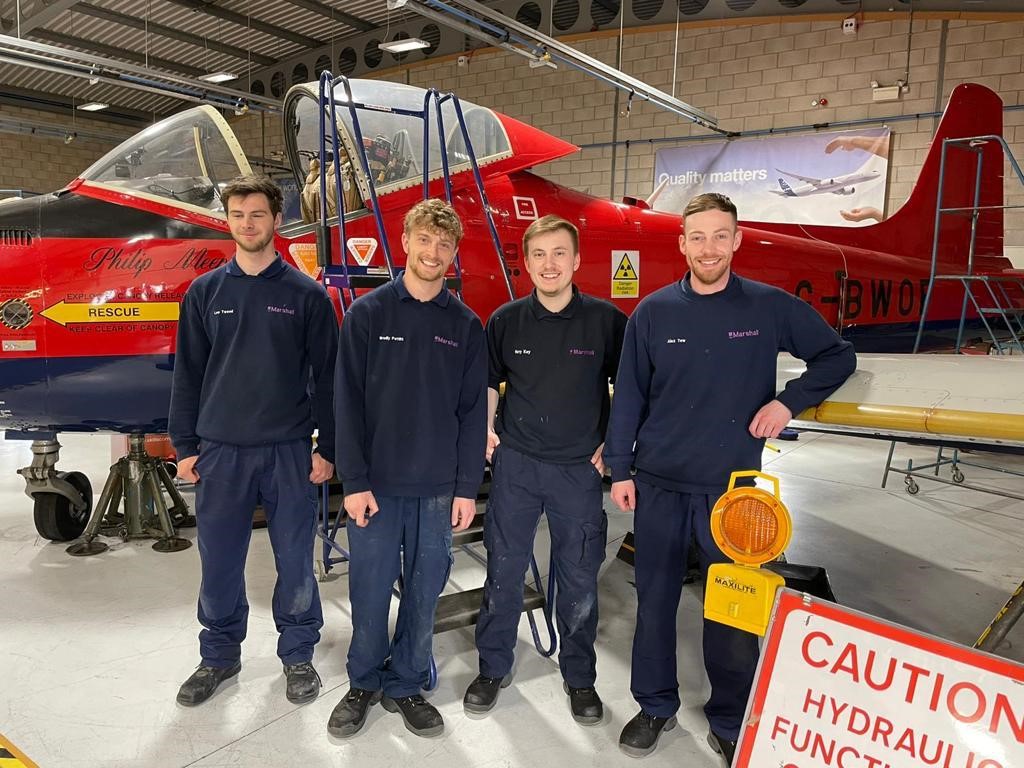 It was challenging to prepare for the nationals as the pre-information was intentionally vague and contestants are not told what to expect in terms of the skills or tasks they would be tested on.

Marshall Learning Facilitator, Robin Lipscombe, and Senior Airframe Technician, John Boyle, led a full-day workshop for the competitors to revisit some of the hand skills that the apprentices learn in the workshop, such as bend calculations and riveting.

John and Georgie accompanied the apprentices to the nationals. Georgie said, “We were impressed with the workshop at Coleg Cambria, and the examiners were happy to see that John and I were there supporting as mentors as most of the other candidates were there on their own. All examiners were incredibly experienced and had amazing backgrounds, mostly ex-forces. At that stage, they were happy to talk to us about what to expect from the three tests the apprentices would complete on the day and what to expect from the finals, if any of our apprentices made it through to the next round.”

The regional competitions tested a good range of skills including a scab patch repair, a wheel/brake strip/rebuild and inspection on a Jet Provost mark 5A, and an inspection on an A320 spoiler actuator. All the apprentices represented Marshall to the highest standard and it was a fantastic learning opportunity for all involved. The apprentices were not given the results on that day and had to wait a few weeks to find out if any of them progressed to the finals.

We are delighted to announce that Bradly Pettitt is one of eight finalists in the WorldSkills UK 2022 competition for aircraft maintenance and will be representing Marshall at the national finals in November at Cardiff University.

Finalist Bradly Pettitt has always had a strong work ethic. He started working at the age of 14 at Gazeley Coachbuilders in Newmarket, and also did bricklaying and labouring on building sites. At the age of 17, he attended college for a year while he was trying to join the Royal Navy and found a retail job but still did labouring on the weekends to earn a bit of extra money. Bradly worked from a young age to help take the pressure off his mother who was studying for her nursing degree at the time.

Bradly joined the Royal Navy after his year at college but discovered it was not for him and left in 2018. He spent the year doing odd jobs and trying to figure out what his next career path might be, and he happened to attend an apprenticeship convention in London where he met a team from Marshall, and he discovered the apprenticeship programme.

He applied and started his apprenticeship in September 2019. Bradly’s cohorts completed their time in the workshop learning metalwork and hand skills and were about to start their first rotation in the hangars when the global pandemic forced everyone to work from home. This meant that the apprentices had the opportunity to complete all their college work at home before the end of the first lockdown and then join the team in the hangars as soon as the first round of restrictions ended.

Once he was part of the bubble system in the hangars and classed as a key worker, he could continue to work on-site regardless of the changing rules and restrictions due to Covid.

When asked about how he coped with doing his college work at home on his own, Bradly said, “For some people, it was a struggle because they were not used to at learning independently from a computer, but I preferred it. There were no distractions, so I found it easier to focus and just get on with it.”

Bradly has been working in the hangars for just over a year and getting exposure to many different types of aircraft to ensure that he fulfils the requirements to pass his competence qualification. He decided to specialise in electrical avionics, and this meant that he hasn’t completed any structural work on aircraft for a long time; so when all three of the WorldSkills tests were based on skills that structural engineers would do, no one would have predicted that Bradly would be the only Marshall apprentice to make it through to the finals.

When asked about his success, Bradly commented, “Although I prefer the electrical side of engineering, I have had a lot of experience in my other roles that helped prepare me. My first job at Gazeley Coachbuilders involved a lot of metalwork. I did both metalwork and electrics in the Navy as I did in the first year in the Marshall workshop and I completed a level 2 in school, which included welding, lathing, machining, and forging.”

Bradly was lucky to have a teacher at school, Dr Kirken, who had a Masters in engineering, and Newmarket Academy was the only school in Suffolk that offered that qualification. Bradly credits his love of engineering to Dr Kirken who was an inspirational force in his life and motivated Bradly to attend his lessons because they were so enjoyable. He said the other students also learned a lot from their time in his classes.

Bradly did not have an easy time at school and could have easily followed a very different path if it wasn’t for Dr Kirken. Often, Bradly didn’t turn up for school or left early, and his behaviour wasn’t seen as acceptable. He was later sent to a Pupil Referral Unit (PRU) after being permanently excluded from his first school. PRUs are alternative schools where students with complex behavioural challenges are sent to receive more personalised support.

Looking at Bradly now, it is hard to believe that this driven, articulate, kind and intelligent young man ended up in a PRU. However, he is a shining example to other young people that your circumstances should never dictate your future and through determination, we can achieve anything we set our minds to.

Bradly enjoyed competing in WorldSkills and described it as a nice day out. The tasks were a little bit different to what he was expecting; he suspected there would be a patch repair task, which is something that he has done before, but was not expecting the hydraulic actuators and wheel removal, which he had zero experience in. 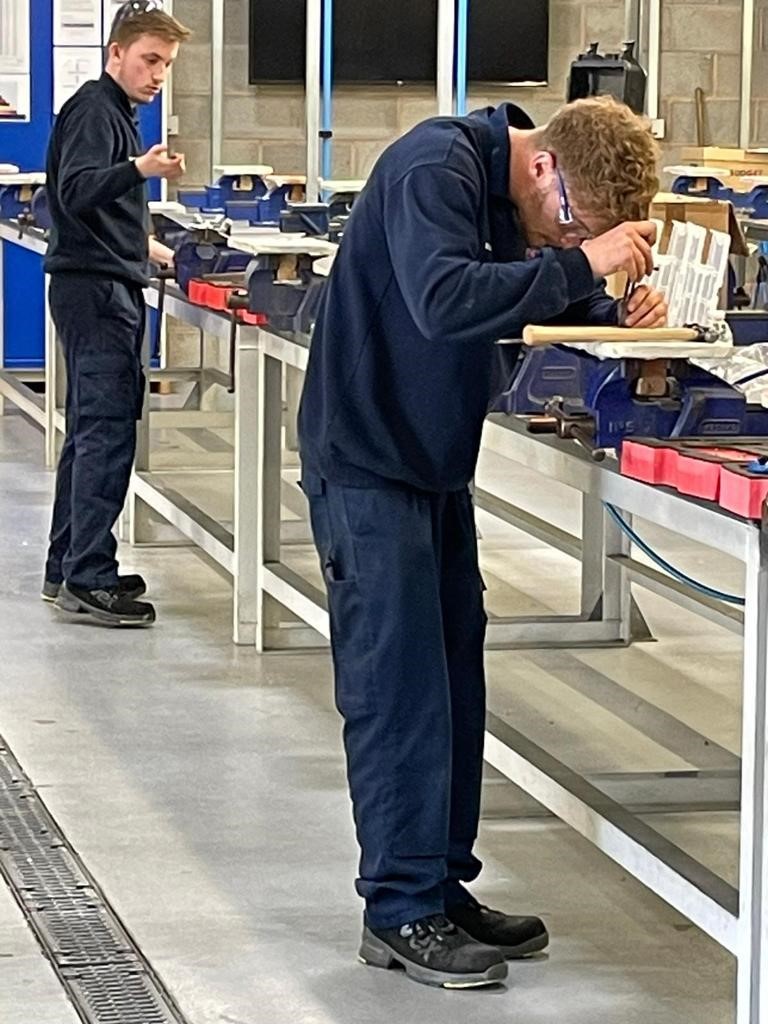 One of the tasks was a joint task so he had help from one of the other apprentices and both tasks had detailed instructions for Bradly to follow. He said, “I made sure that I took the time to read the instructions carefully. It was almost better that I had never done those tasks before as I wasn’t complacent and followed the steps as they were set out, which I think helped. I think it is better sometimes when you don’t know what you are doing, as you take your time and focus rather than rushing through it.” 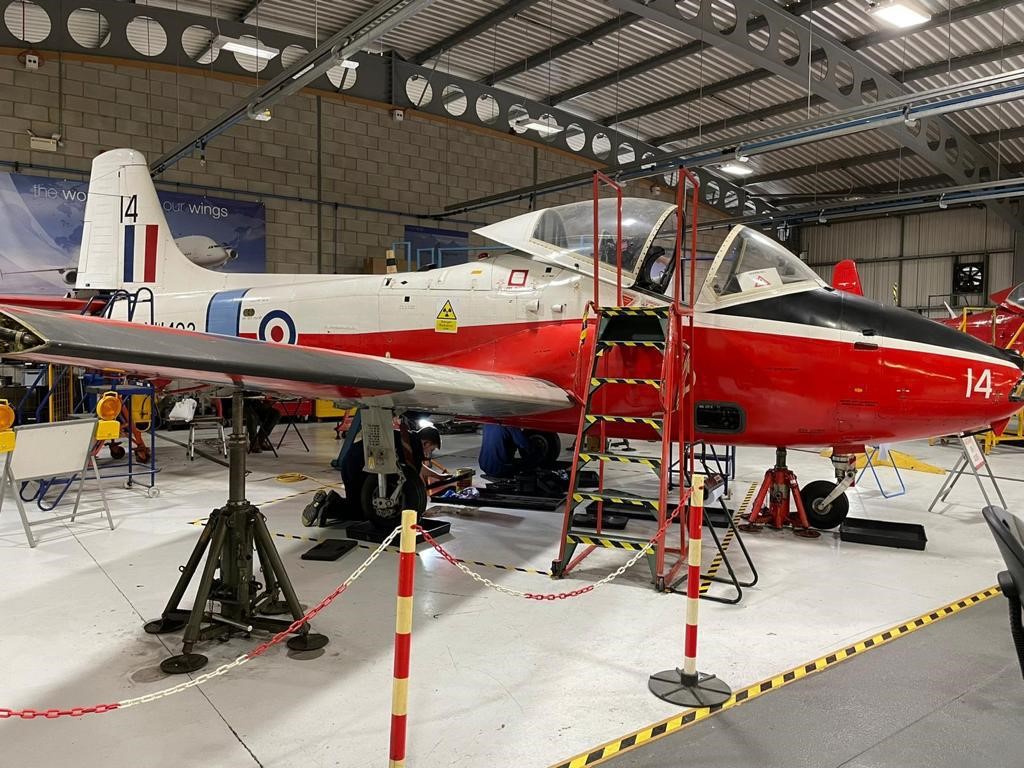 Bradly was surprised and delighted to find out that he made it through to the finals in November. Jokingly, he said there is an age-old friendly battle that happens in hangars across the globe between airframe technicians and electrical avionics engineers, and Bradly thinks this should finally prove that electricians are the best. “I’ve proven the point now, so they can all stop arguing!” he said, laughing.

Bradly will receive training from the WorldSkills team to prepare him for the finals. We asked his mentors, Georgie Scott-Wilds (Apprenticeship Coordinator) and Glenn Stanton (Bradly’s manager) if they have any advice for Bradly.

Georgie said, “Just do your best, Bradly. You have done so well to make it to the final eight. This is a fantastic opportunity to be trained by the WorldSkills team and we will support you in every way. Irrelevant of the outcome, the experience will be incredibly valuable for you and the future mentoring of Marshall contestants.”

Glenn added, “It is very gratifying for Marshall that once again one of our apprentices has reached the UK finals and hopefully will go on to the World finals. Bradly has embraced the opportunities afforded him by the apprenticeship and, having chosen the Avionics path, he has a sound future in the industry. My advice to Bradly is – you can only do your best!” 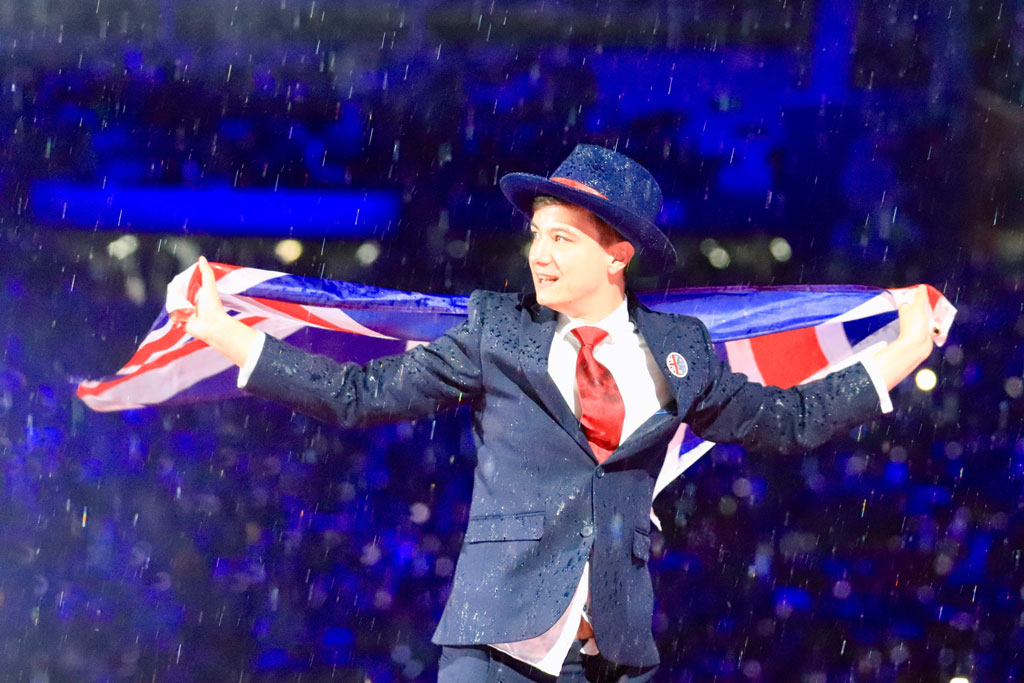 Bradly is further proof of the standard that Marshall apprentices are trained to by Marshall Skills Academy.