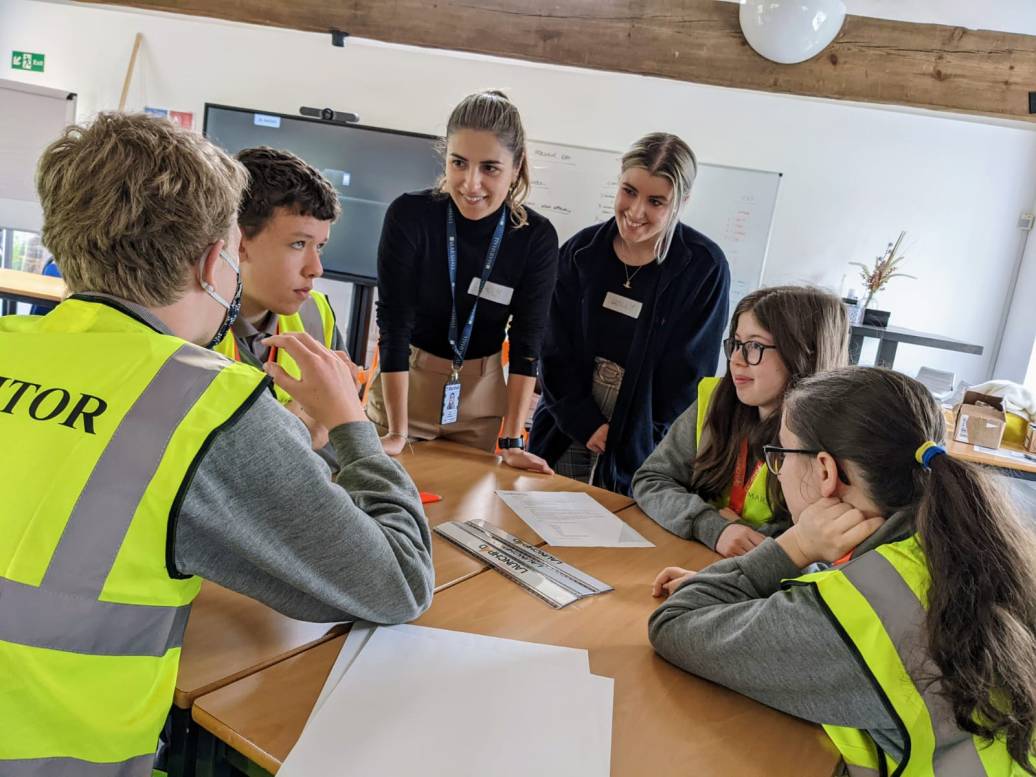 Marshall is proud to be a founding member of Cambridge LaunchPad which facilitate a fantastic range of free workshops for local schools with hands-on activities to inspire the next generation to pursue careers in STEM.

Marshall Skills Academy recently hosted an exciting day for a group of year nine students who visited us on-site to take part in a Cambridge Launchpad Project Day. The students were challenged to work in teams to design rockets based on specifications to protect fragile poppadoms from impact and heat as the rockets were fired outside across a guidewire. 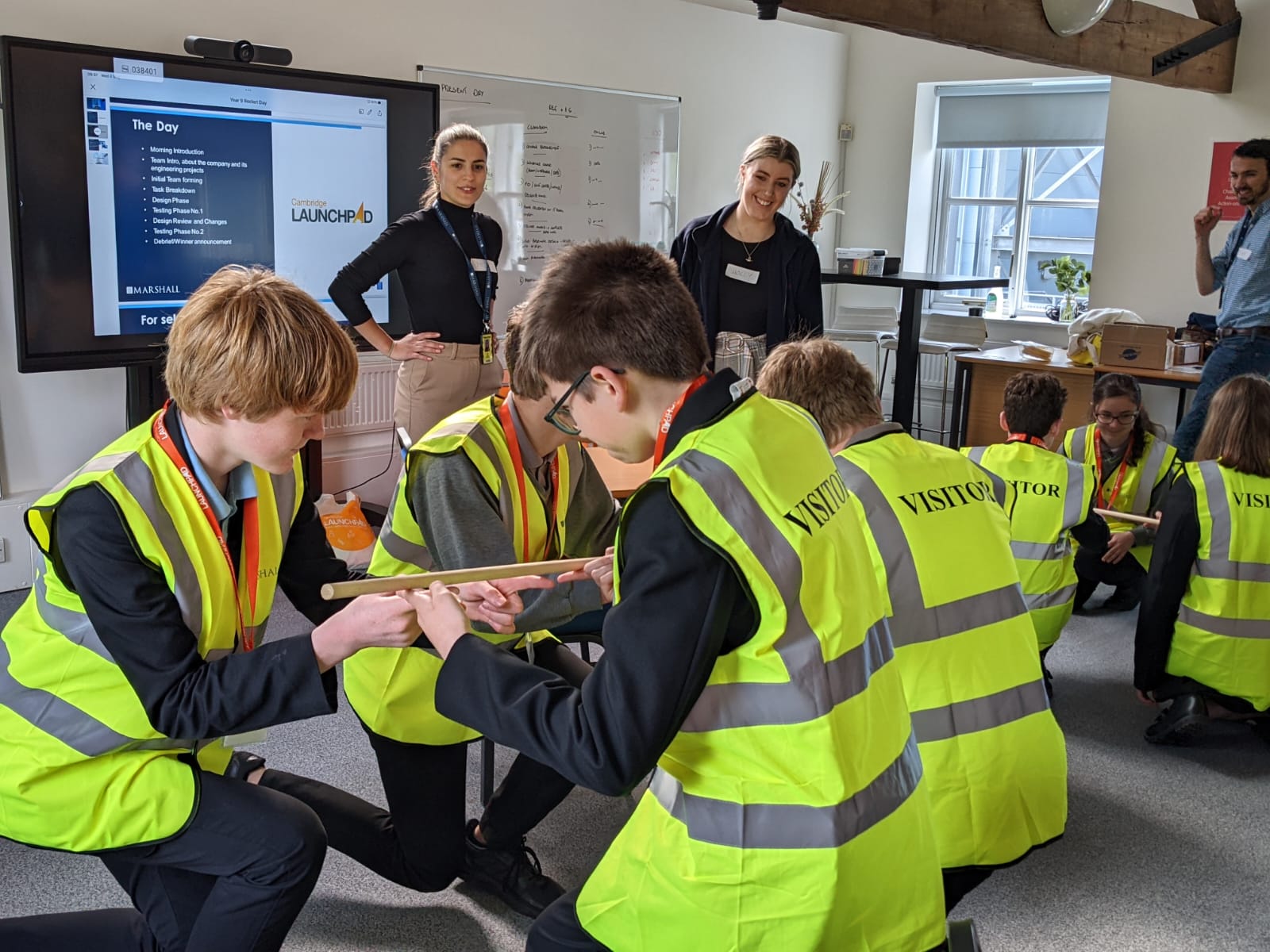 Recently, a group of students from Comberton Village College and Linton Village College were invited to Green House Farm to compete against a team of second-year engineering apprentices from Marshall to design the most successful rockets. Their aim for the day was simple: to create a rocket that could hold a poppadom and travel from A to B (B being the fabled starship, the USS Tandoori) whilst keeping the poppadom completely intact. The teams were given two attempts to get their rockets from one side to the other in one piece and the team that created the most successful rocket was crowned the winner at the end of the day. 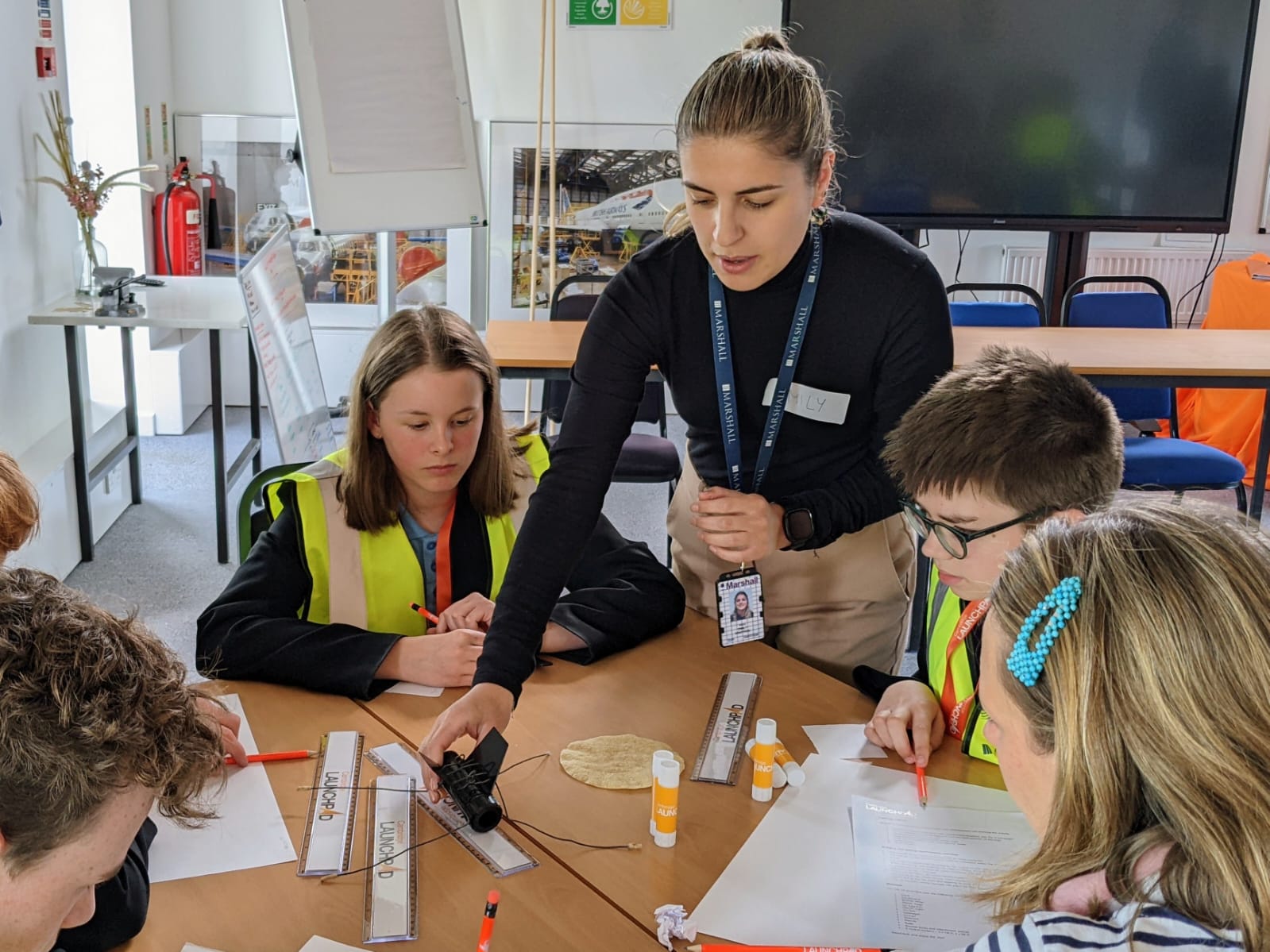 The students were given an instruction sheet with a set of specifications that their designs had to adhere to in terms of shape, weight and function but there was also plenty of room for creativity and interpretation. Our young engineers were given a plethora of resources to choose from to build their designs including cardboard, egg boxes, plastic bags, tin foil, tape, polystyrene, ping pong balls, bubble wrap and many other recyclable materials. First, the students were given time to plan and sketch out their designs, which were then presented to the team from Marshall and LaunchPad who were on hand to support the students and make suggestions for improvement. They were then given time to work as a team to build their rockets before the first test flights outside in the garden.

The first attempts served as a chance to learn what worked well and what needed to be adjusted to make their rockets perform even better. After lunch, the students were given time to make improvements to their designs before a second attempt at firing the rockets to find out who had the best design of the day. This was done to teach the students about basic engineering principles and to challenge them to think about learning how to improve their designs after an initial test. 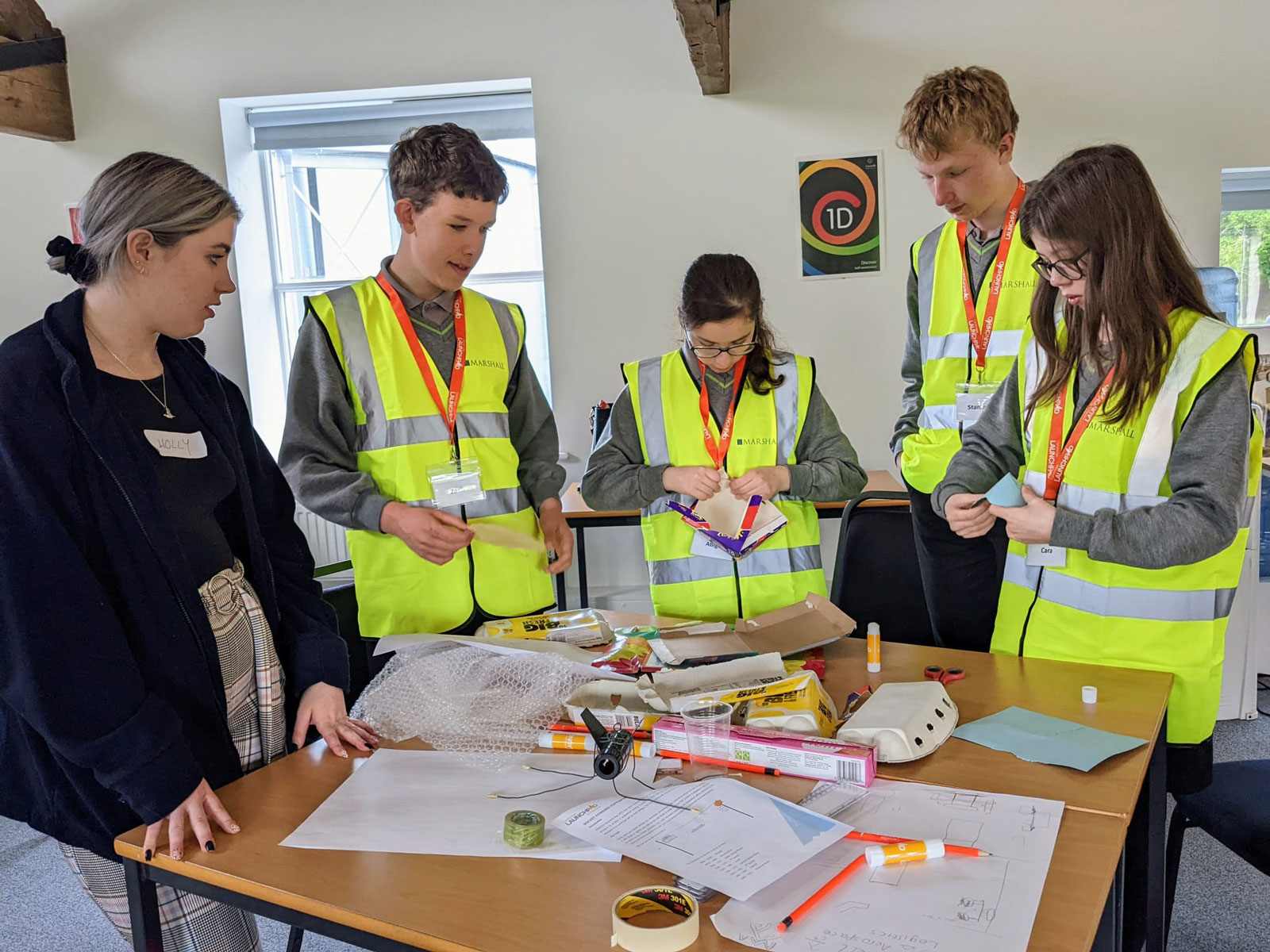 Talking to some of the students, Emily Argyrou 3rd Year Apprentice at Marshall Aerospace, said:

"I wish this kind of event had existed when I was at school. These events are great for inspiring the next generation of engineers to consider doing an apprenticeship from an early age."

The day was a huge success; the students represented their schools positively and demonstrated some fantastic creative problem-solving skills, teamwork and design capabilities. Ultimately, the team from Litton Village College secured the victory with their Angry Birds inspired rocket ship. 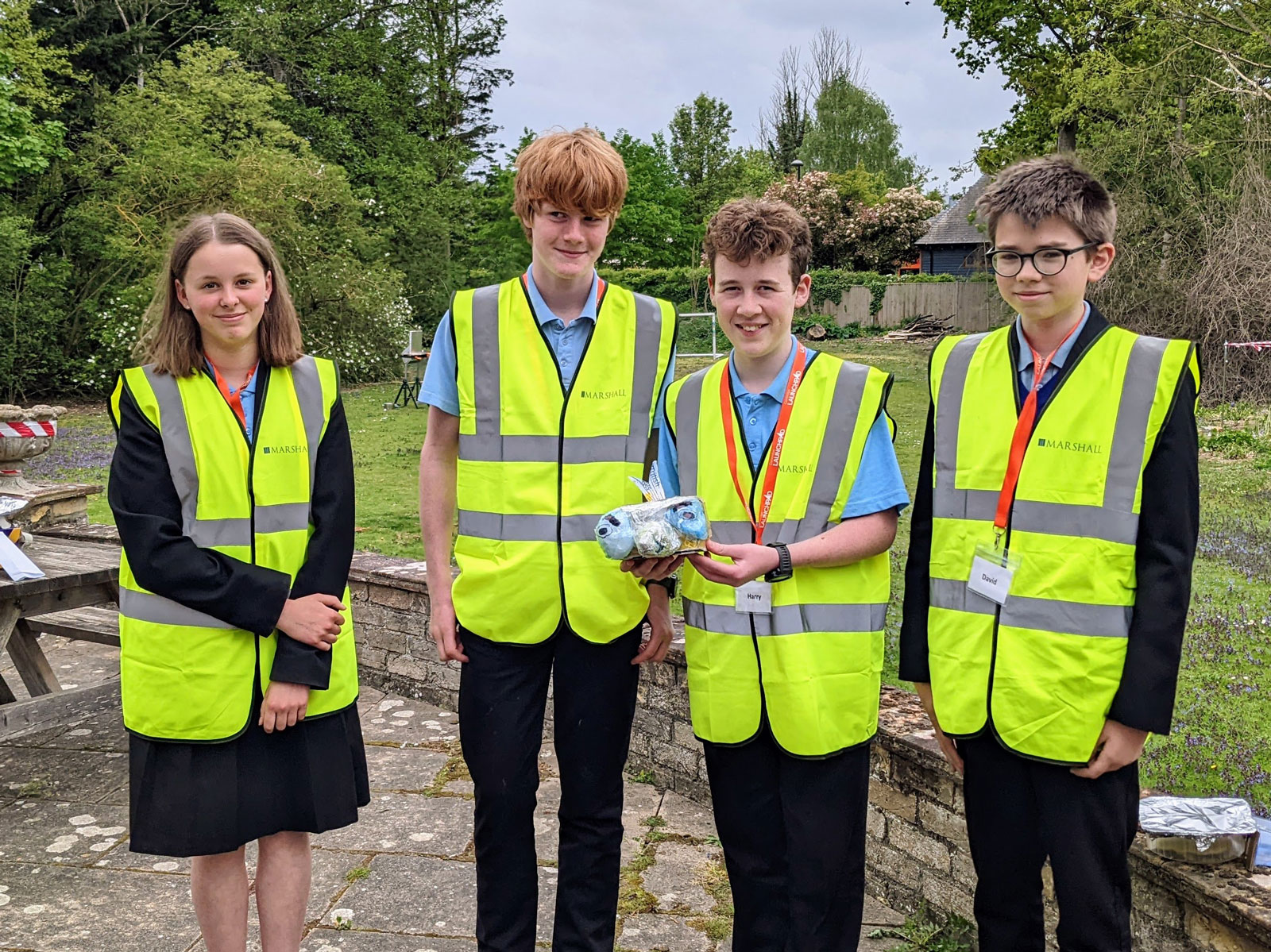 Thank you to all who supported to make the project day a huge success.