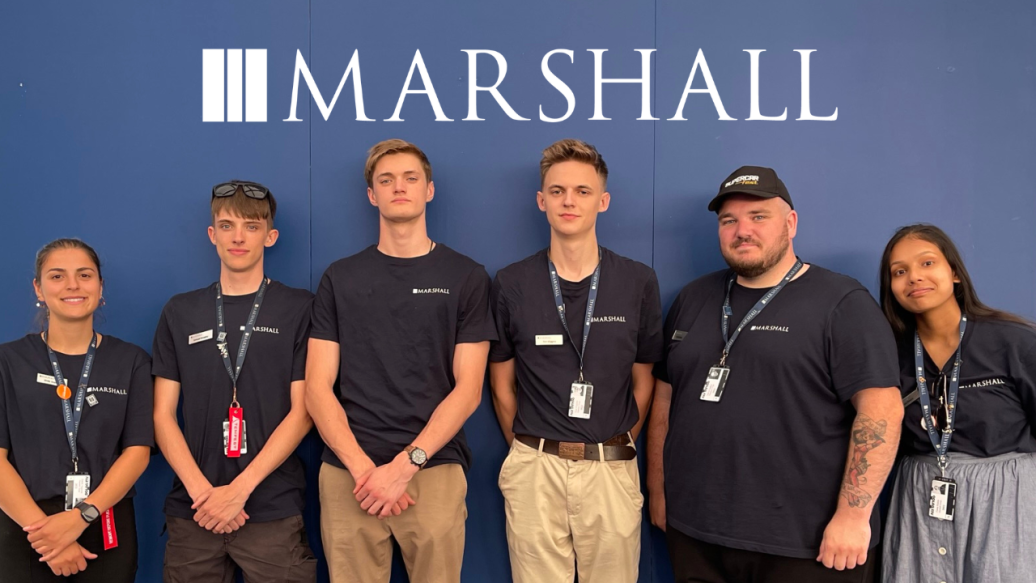 The Royal International Air Tattoo (RIAT) returned this year (2022) for its first live show since 2019. This extraordinary event is more than just a celebration of all things aviation and spectacular air displays, it is also a major contributor to the Royal Air Force Charitable Trust (RAFCT) who continue to invest millions of pounds towards engineering and flying scholarships.

“I’ve really enjoyed watching the air displays. I’ve been coming to RIAT for many years with my father who is now retired from the RAF and he instilled a real passion in me for different aircraft, so it has brought back many great memories of being here and seeing all the great displays.” - David Sadler

Marshall has a long history of supporting RIAT and, this year, we were excited to invite six of our apprentices: David Sadler, Tom Wiggins, Sam Lee, Fiona Perera, Sam Doughty and Emily Argyrou to form the bulk of our Marshall Techno Zone team. The Techno Zone is a large space dedicated to STEM (Science, Technology, Engineering and Math) education and inspiring the next generation of engineers and innovators. Many different aerospace and engineering organisations came together from across the UK to provide interactive STEM activities and innovative exhibits inspired by the future of aviation to give the Techno Zone visitors memorable, hands-on experiences. 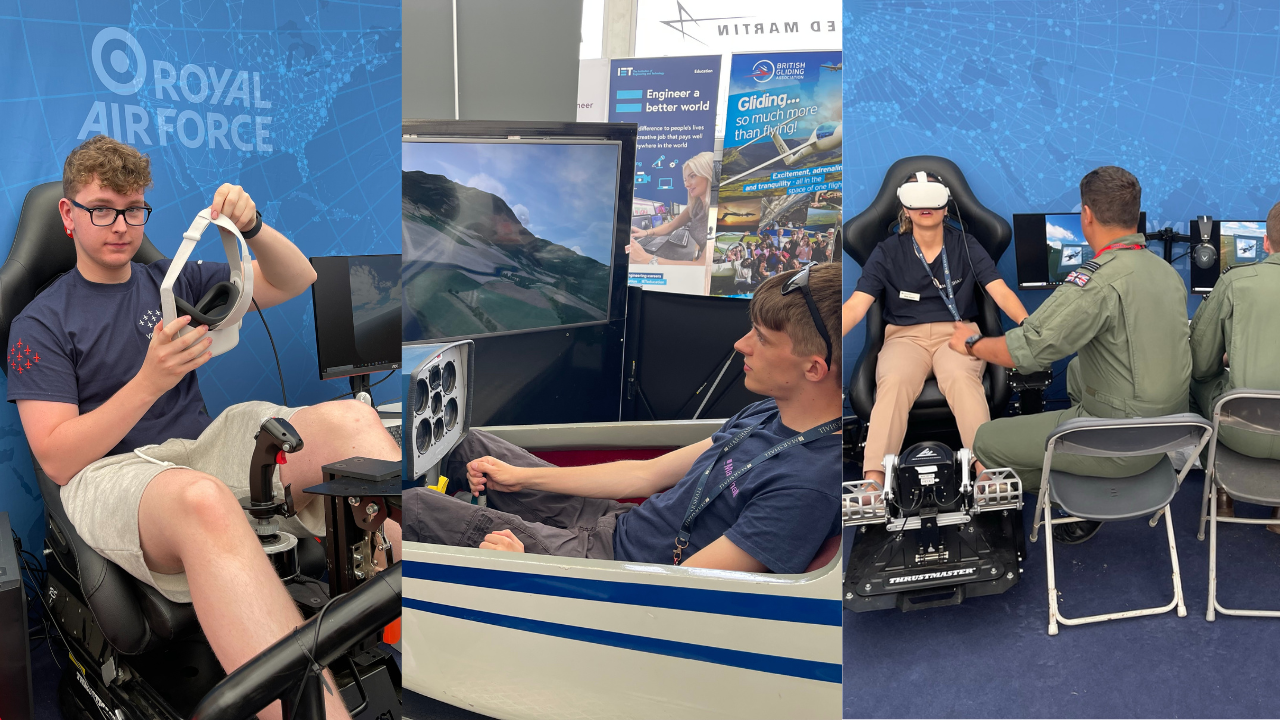 “I loved trying out all the different STEM activities in the Techno Zone, from racing cars to flight simulators and I can see how valuable this is for young people to get them excited about engineering as a career path.” – Fiona Perera

There was an impressive array of activities for the Techno Zone visitors to enjoy and learn from such as flight simulators, using a rivet gun, launching mini ejector seats, virtual reality experiences, assembling miniature jet engines, a drone obstacle course, wiring challenges and building hoop gliders to name a few. As well as the opportunity to meet some inspirational engineers, pilots, and astronauts.

“I enjoyed walking around and seeing the different companies who attended, some of which I had never heard of before. Being an apprentice and knowing that my future is in the aviation industry, I took the time to talk to them about what they do and make some good contacts to extend my professional network.” - Tom Wiggins

As the theme of the Techno Zone was focused on the future of aviation, the Marshall stand included multiple interactive activities and demonstrations to get our future engineers thinking about common challenges that the aviation industry must solve to ensure it becomes more sustainable and environmentally friendly. Below is a breakdown of each activity and how it tied into the theme. 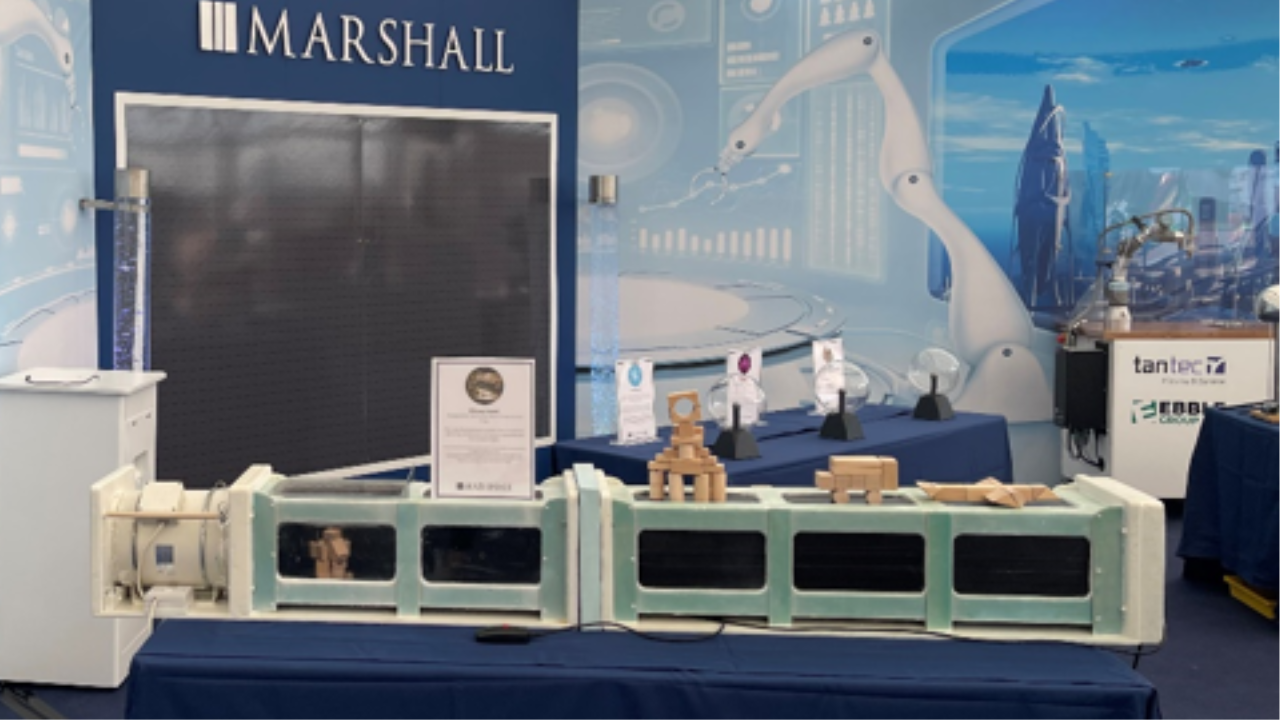 Testing aerodynamics in a wind tunnel

Aerodynamics refers to how objects such as aeroplanes and cars move through the air. The rules of aerodynamics explain how an aeroplane flies using a careful balance of the forces drag, lift, thrust and weight. Everything that moves through air from a space rocket to an aeroplane to a car is affected by aerodynamics, and understanding aerodynamics is vital when thinking about designing future aircraft that are capable, efficient and competitive. 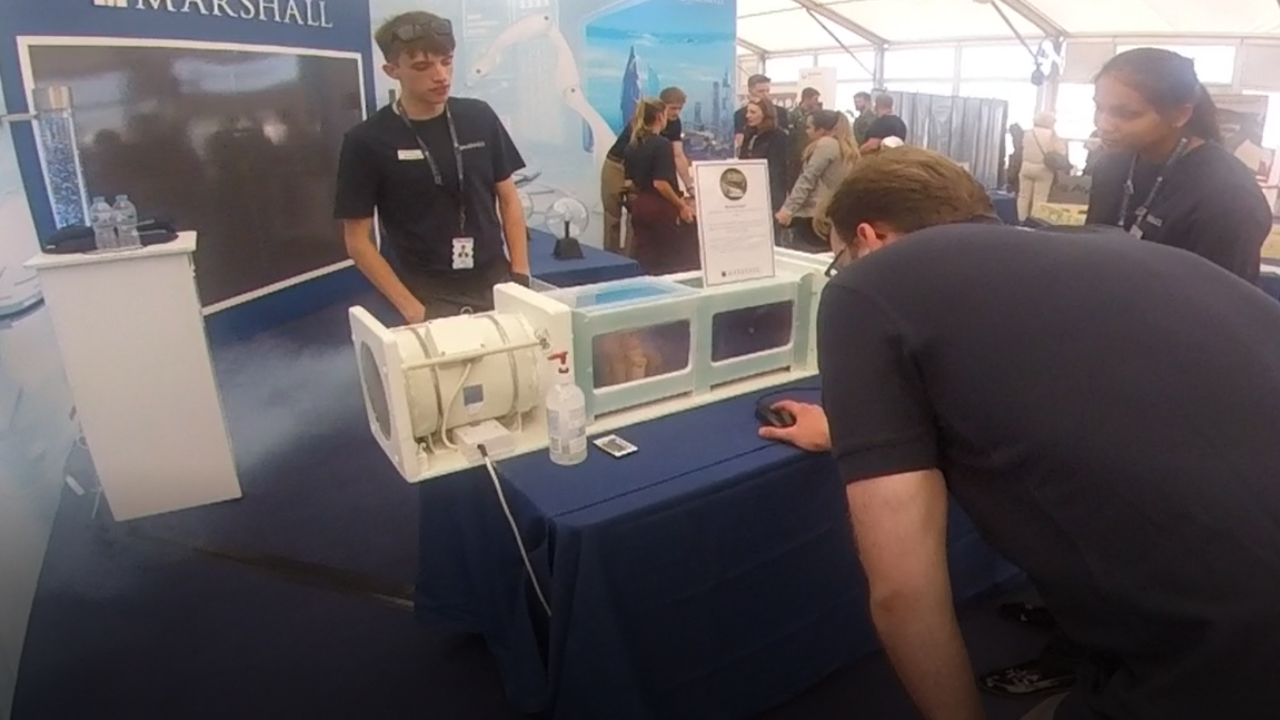 Our engineering apprentices built some wooden models for the visitors to test in our wind tunnel. They placed the object into the chamber of the wind tunnel and pressed a button to fire a smoke machine. The fan created suction allowing the smoke to flow over the object and out of the wind tunnel. We used smoke to allow our visitors to see the air flowing over the object to facilitate a discussion about the importance of aerodynamics especially relating to designing fuel-efficient aircraft. 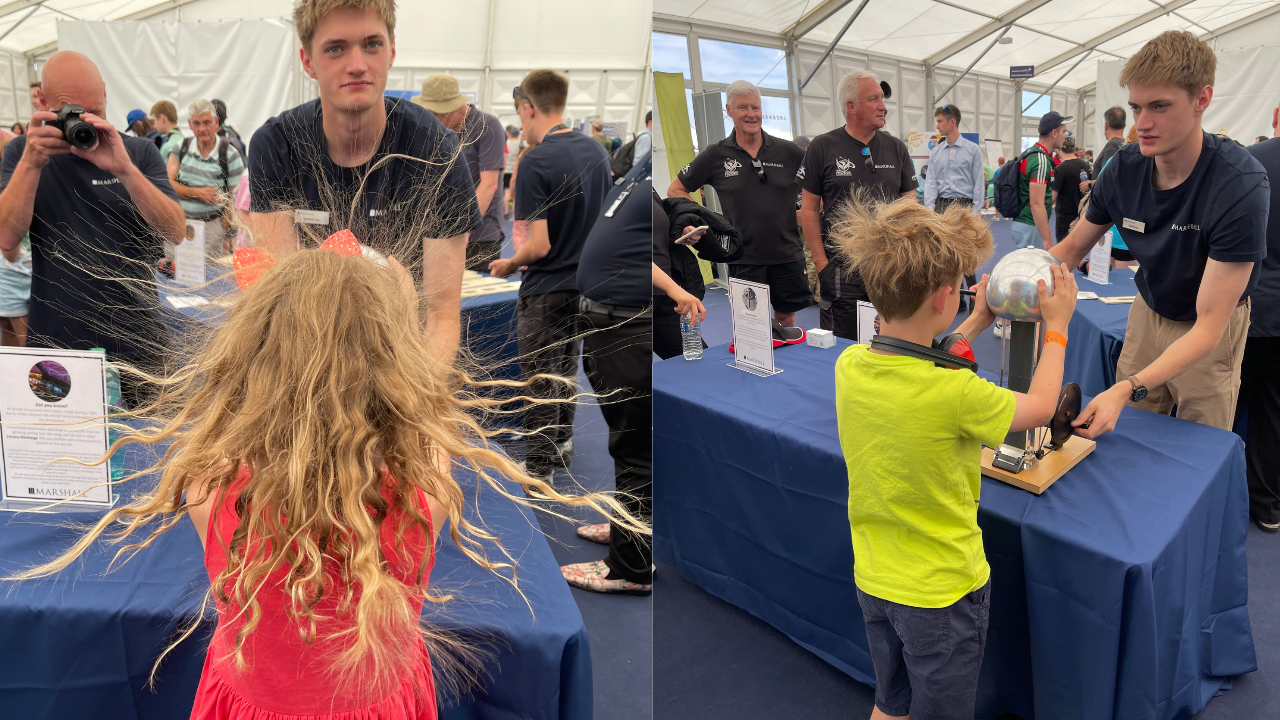 “I really enjoyed meeting all the visitors, showing them around our stand and talking to them about all the great work Marshall does, as well as inspiring the young people through our different STEM activities. Seeing all the smiles on their faces and hearing how much they learned from being on our stand made the experience memorable” - Sam Lee

During flight, friction between the aircraft and particles in the air creates static electricity that accumulates on the aircraft until it is discharged. As the aircraft is not touching the ground, engineers must design elements on the aircraft to help discharge the static electricity safely. Currently, we use static wicks, which are the metal rods on the wings that allow electrostatic energy to discharge back into the atmosphere. If we do not have these devices on aircraft, the ESD can be so powerful that it creates interference with communication systems and, over time, cause damage to sensitive electronics. We used a Van Der Graaf Generator to demonstrate this principle. By asking the participant to stand in a plastic tray, they were no longer earthed and so the static electricity built up in their bodies. This is something that the participant can feel but also that others can see as their hair started to rise. The volunteers could then decide how to discharge themselves either by standing on the ground or by touching someone to give them a static shock, we will let you guess what the most popular choice was!

Some innovative engineers are starting to experiment with harnessing and storing the static electricity built up during flight, instead of discharging it, and using it to power small lights and minor electronics on aircraft. 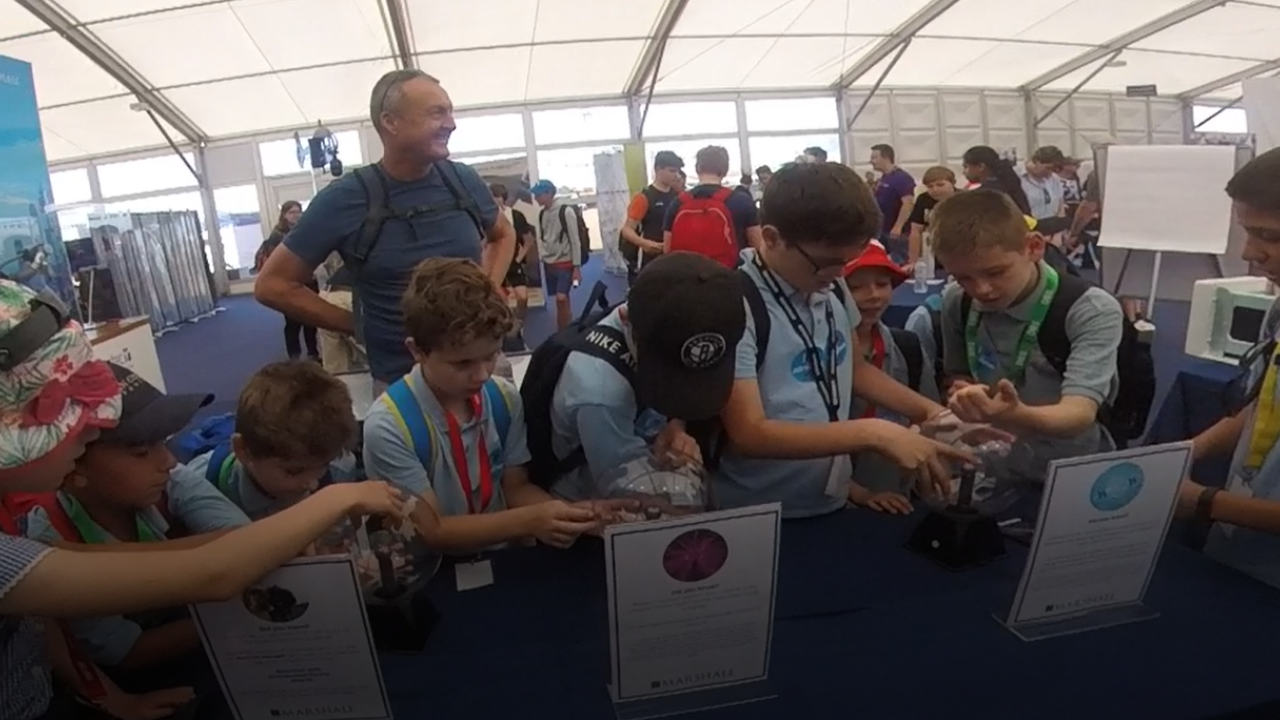 We all remember being taught about liquids, solids and gasses at school, but plasma is often referred to as the fourth state of matter and is the most abundant state of matter in the universe. Plasma is formed when energy is added to a gas creating a mixture of positively and negatively charged gas particles. Engineers and scientists are looking into the vast uses of plasma across many industries including aerospace and clean energy production. We may even see plasma thrusters used in future aircraft to power them without the need for fossil fuels. 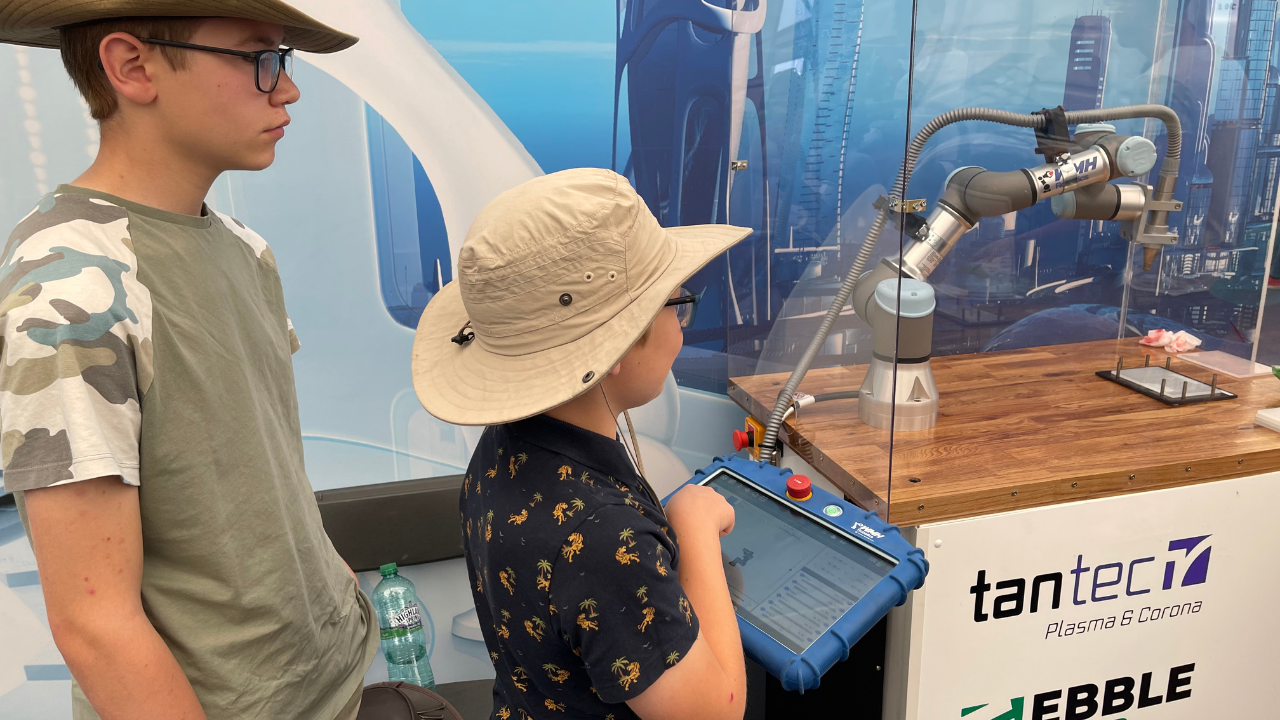 Continuing from the plasma balls and the applications of plasma in aerospace, we were grateful to our friends at Tantec for lending us their plasma surface treating robot. The robot uses plasma (charged gas) to raise the surface energy of different materials to improve the bonding characteristics and help solve the problem of adhesion without using any chemicals that may be harmful to the environment.

For the demonstration, we used polypropylene sheets that are typically hydrophobic (repel water) but after being treated by the robot, the surface becomes hydrophilic (attracts water). We invited volunteers to draw on the untreated sheets and rub the ink off, which could be done easily, then try to rub off the ink from a treated sheet, which did not come off despite many determined young people giving it their best shot. 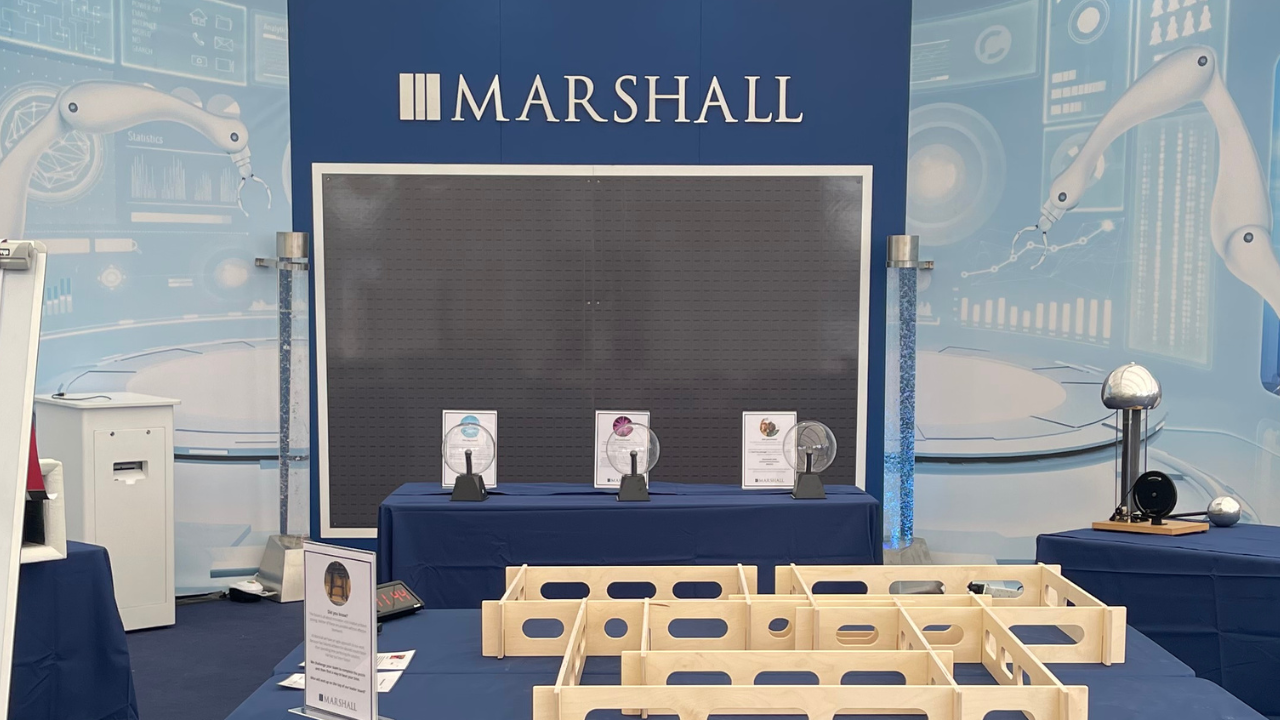 Something is calming about watching bubbles float up through an illuminated tube. However cool these might look; our bubble tubes were not just there for decoration. We used these to facilitate discussions with our visitors about the future possibilities and challenges of using hydrogen to fuel aircraft. Hydrogen is the most abundant element in the universe and a clean, effective fuel as it is extremely flammable the waste product produced when burning it is water. 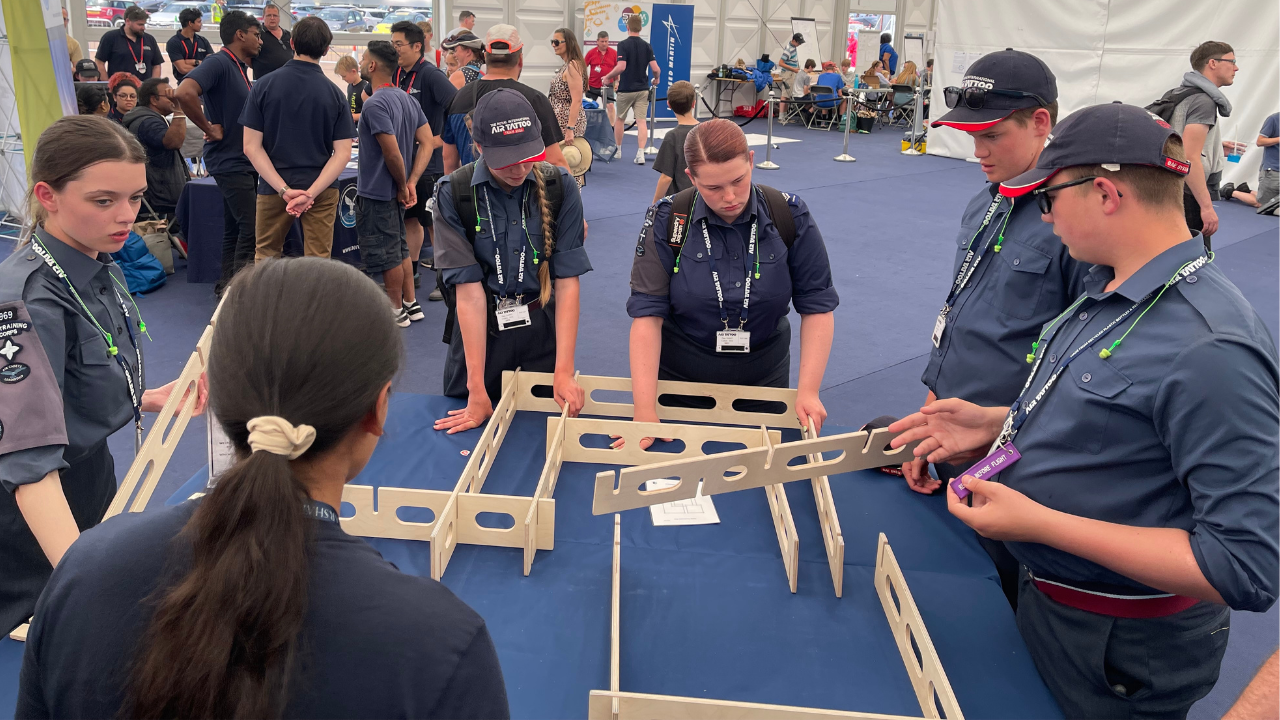 Innovation and development of new engineering designs require teamwork, agility, and the ability to fail fast but learn faster. This is a way of working that we champion at Marshall, and we wanted to showcase this through an interactive team challenge. The planks connect in a very specific way and the puzzle is much more challenging than it first looks. Teams were tasked with creating a strategy for assembling the puzzle in the fastest time possible and were allowed to have multiple attempts to complete the puzzle faster than they managed to do it previously, each time finding ways to work together more efficiently to solve the problem. It was fascinating to see how the different age groups and gender groups responded to the task. Our apprentices were on hand to provide some assistance and advice. Although a few teams came close to beating the top score, the Marshall apprentices managed to remain undefeated with a time of 7.52 seconds. Considering the world record is 6 seconds, we think our apprentices did very well.

“My favourite activity was the planks team challenge and seeing how different teams approached the timed puzzle challenge and worked together to solve the problem.” - Emily Argyrou 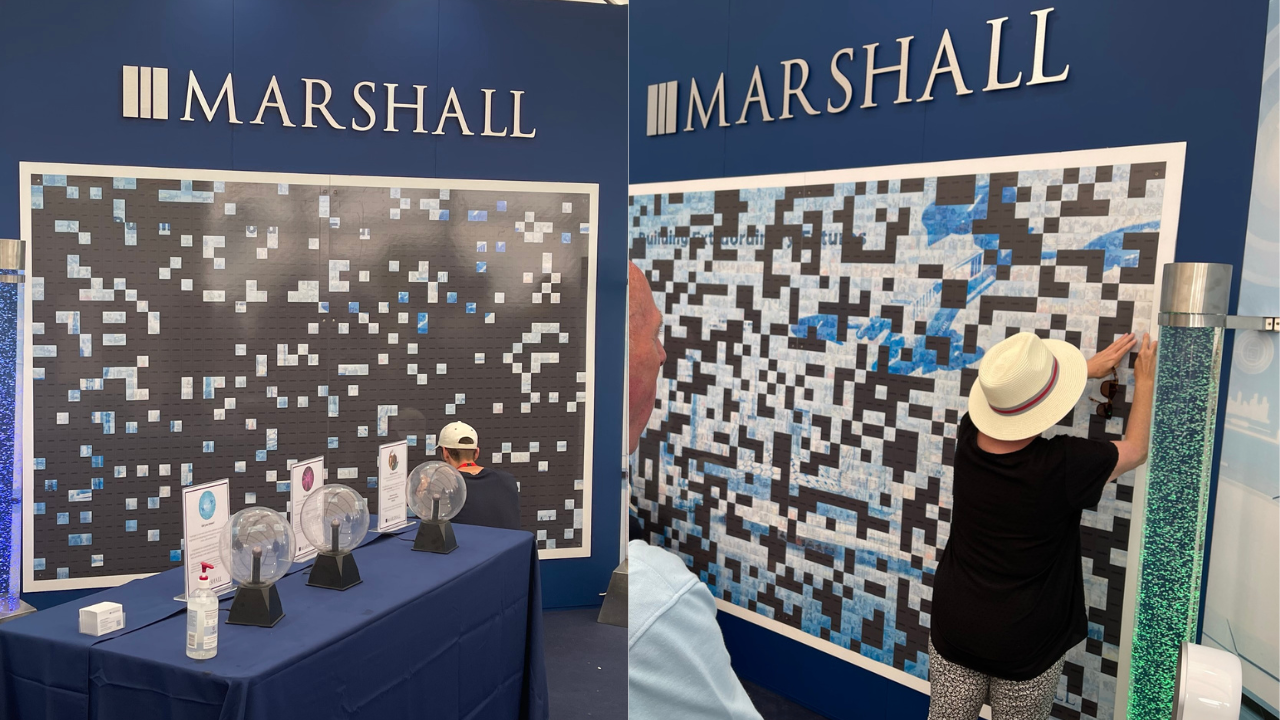 RIAT is such a fantastic event that we wanted to capture the memories interactively, showcasing all the visitors and the team in action. We incorporated a photo mosaic wall from Noonah. Photographs from across the event were fed into a computer that printed each picture on a square sticker with a colour filter over it. Each sticker correlated with a numbered square on the board, which revealed a beautifully designed graphic over three days. It was a great way to get people involved and coming back to our stand to see how it was progressing but also to create a piece of shared artwork that will be proudly displayed in our new apprentice workshop. 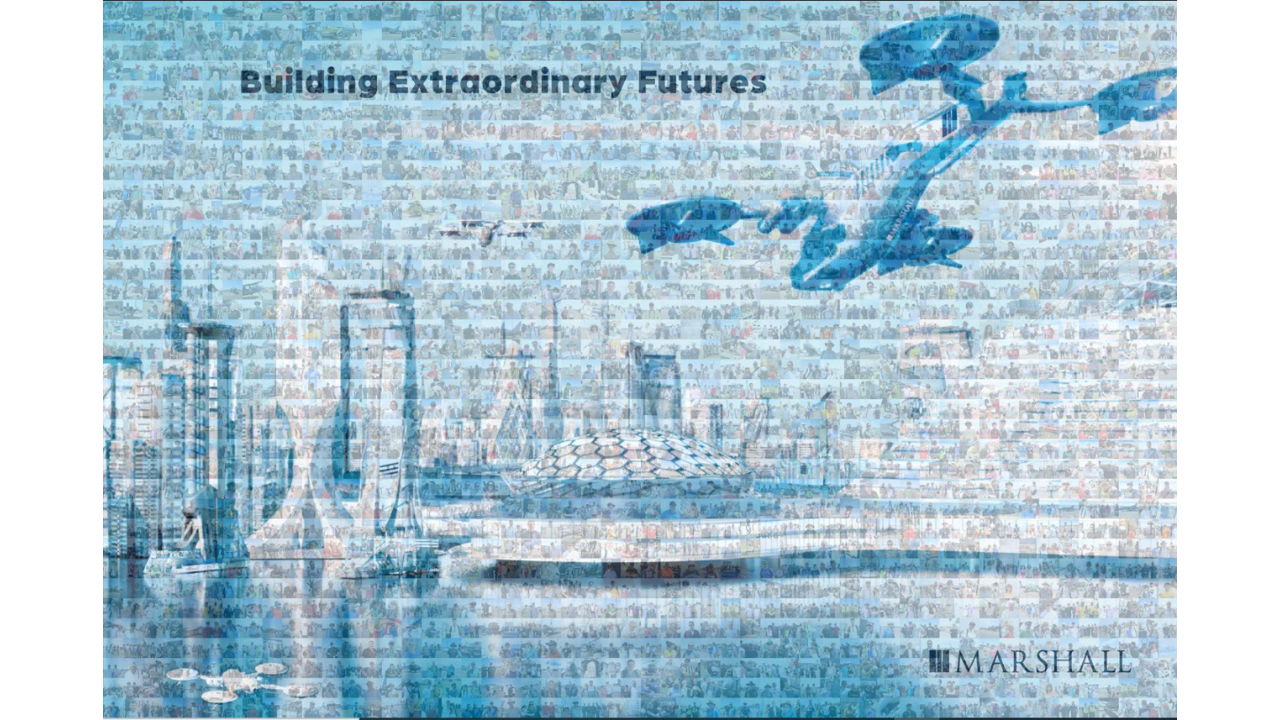 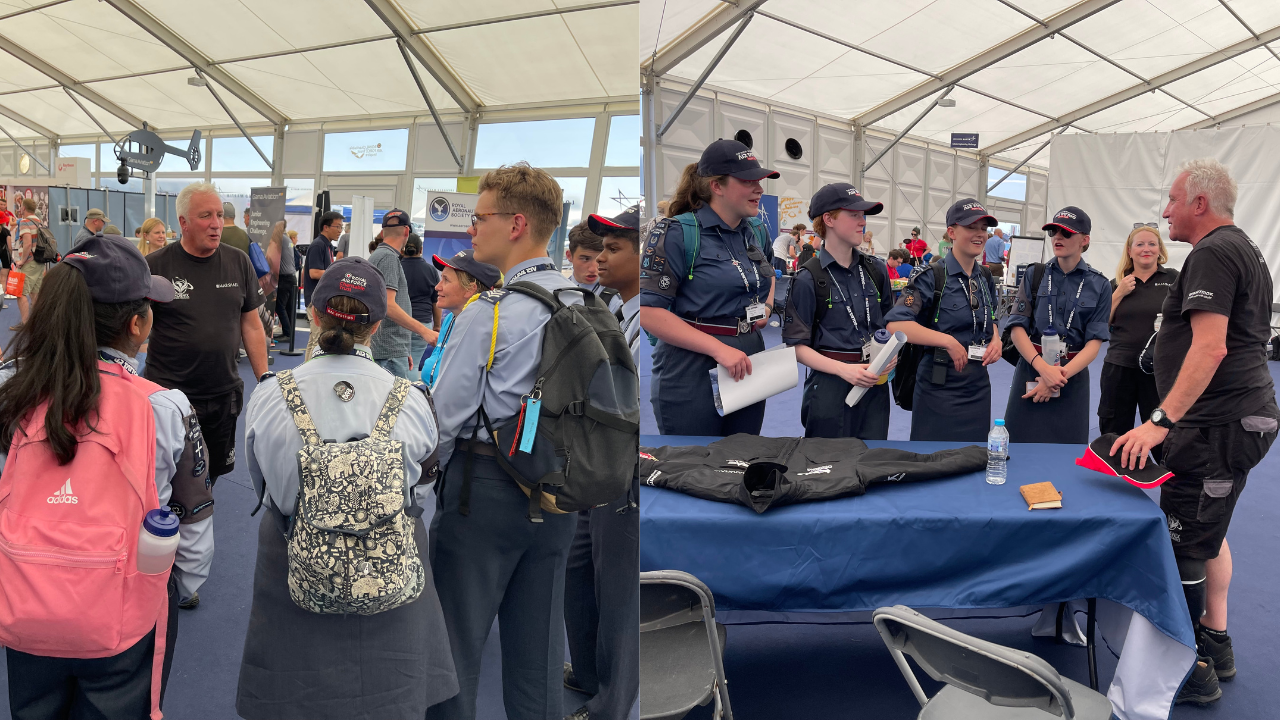 “Meeting Mike from Team Phoenix was a highlight for me. I loved finding out more about what they do and how they promote diversity and inclusion through their experience in aviation.” - Sam Doughty

Team Phoenix are the world’s first amputee aerobatic formation air display team and they have recently become Marshall brand ambassadors. Team leader, Mike Wildman joined us at the Marshall Techno Zone stand for a meet and greet on Saturday. Their story is inspirational with a clear message of inclusivity and diversity showcasing the incredible ability of disabled people. Mike was very popular, and the young visitors enjoyed finding out more about Team Phoenix and Mike’s background as a pilot in the RAF, flying commercial jets and now leading the first amputee aerobatics team. RIAT introduced the Inspire Stage this year, which was the result of a year-long “If you were an engineer” competition aimed at primary school students. Three of the winning designs were then taken to prototype stage by university students. Walking around the Inspire Stage exhibit, it was clear that were so many innovative ideas that choosing a top three must have been difficult. Astronauts Tim Peake was among some of the special guests who visited the Inspire Stage to show their continued support for the development of future talent in STEM.